Tyler Seaberg, CEO
The Blockchain technology has proven its mettle in the world of banking and cryptocurrencies and is now finding novel use-cases in various other industry verticals as well. Who would have thought that this revolutionary technology could be integrated into the medical realm as well? Sure enough, two brothers drew on their vision for delivering better healthcare and innovative tools to improve the pharmaceutical industry. What resulted was the conception of their enterprise, EirSystems, who by leveraging the Hyperledger Fabric framework is on a mission to design products to connect all aspects of the medical industry on a consolidated platform.

EirSystems aims at improving the process workflow at hospitals and pharmacies to render efficient drug monitoring procedures. Tyler Seaberg, CEO of the company, along with his team, set out on this direction, when they observed that the medical field faced specific pharmacy-related challenges—the most impactful of which was the opioid crisis. Going back as early the 1990s, abuse of controlled substances has been on the rise, making it a dominant source of worry for doctors and civilians alike. There exist several inefficiencies in this area due to lack of interoperability of data, oversight, and standardization of policies that make tracking drug distribution difficult.

Hyperledger Fabric blockchain technology empowers EirSystems to deliver a more transparent and accountable store management offering for medical drug distribution. EirSystems’ product, Prescription Abuse Greatly Reduced (P.A.G.R) Prescriptions, will allow for scalability through its convenience in monitoring high volumes of data. The company repurposes the formidable platform, Fabric CA to allow medical entities to be registered on their blockchain network and related credentials to be validated while generating an e-prescription for respective patients. Once registered, Fabric CA makes users active on the network, enabling transmission of data through their API- integrated node system, into the existing cloud software of clients.

EirSystems’s solution can be integrated into legacy systems in medical establishments, to make the treatment history OF patients readily available, and to electronically generate prescriptions SECURELY

The company, through the P.A.G.R mechanism, devises a new database that will include; the name of the patient, name of the drugs and medicines, its dosage, number of required refills and also the duration of the medication. This data is then transferred onto the ledger with the physician’s name and the name of the pharmacy to enable a quicker initiation of an investigation, in case of any fraudulent prescriptions, making the entire procedure less time-consuming. Appending medical information atop the blockchain networks enables it to be interoperable and accessible by bodies such as state prescription drug monitoring database (PDMD), and the pharmacy oversight board or the Drug Enforcement Agency (DEA). EirSystems’ solution can be integrated into any legacy systems in medical establishments, to make the treatment history of patients readily available, and to generate prescriptions electronically.

Having successfully prototyped its novel offering; EirSystems is moving toward acquiring two major federal grants including the Harold Rogers Prescription Drug Monitoring Program and the National All Scheduled Prescription Electronic Reporting Program. These grants will be helpful to launch their product in the state of Tennessee, followed by a nation-wide release. EirSystems aims at sharpening the edge of their offerings by leveraging AI to carry out health records’ analytics. Seaberg states, “Our company mainly focuses on the idea of making this world a better place through the application of blockchain in healthcare. Our team has worked incredibly hard and is why EirSystems in 10 months of operations is a month away from coming out with our BETA product. We hope that the medical and legislative community sees the benefits we offer the healthcare industry and help bring this product to life.” 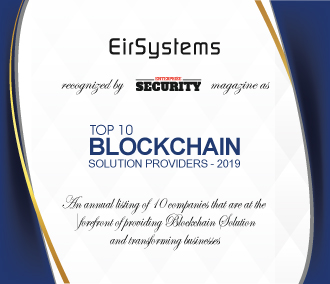