From an “information storing, handling, and transmitting” perspective, the healthcare space has historically resorted to siloed EMRs and EHRs that rendered a great deal of opacity toward the access of crucial healthcare data. The issue burdens not only providers—of say, a healthcare institution that is treating a patient who received care from another location—but also payers and patients. To this end, Timicoin defines a higher dimension for healthcare data interoperability and security by rolling out a revolutionary blockchain ecosystem, TimiHealth that encapsulates tools purpose-built for and easily adoptable by the healthcare realm. “Today’s healthcare infrastructures are fundamentally flawed in the way they handle data. The complexity, confusion, and loss of time and money that result from such levels of operational fragmentation is simply undesirable; especially in the healthcare space,” says Will Lowe, co-founder at Timicoin.

The care fragmentation has resulted in expenses related to redundant tests that amount to more than 65 billion dollars annually. Not to mention the fact that the patients who morally ought to be the authoritative owners of these test results have little to no control and visibility as to who accesses, uses, and even distributes their information. In parallel, security breaches targeting healthcare systems are alarmingly on the rise. It’s a no brainer as to why recently, the Department of Health and Human Services has issued new interoperability rules that assert complete patient ownership of data, promote record matching, and emphasize that health systems must have data sharing and notification capabilities such that information blocking becomes “a thing of the past.”

Timicoin’s suite of blockchain based offerings addresses the looming security, privacy, and “seamless exchange and transferability” needs of the hour pertaining to healthcare data while simultaneously enabling players in the space to adhere to progressive data-centric regulatory mandates. By primarily leveraging the blockchain ecosystem that is known to be breach-proof to date, Timicoin gives patients control and mobile-friendly (app interfaced) access to their data. Moreover, TimiHealth leverages blockchain-native tokenization (via digital wallets) that facilitates payments to patients, for instances when their data is being used for clinical trials or any research purposes. 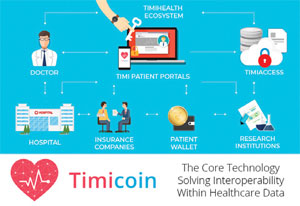 With an API driven strategy, Timicoin streamlines patient data gathering and mapping across EMRs/EHRs/ HIS, and even from public registries and payer databases. Interestingly, Timicoin’s interfaces are designed so that they could even serve as a fully functional EMR (TimiEMR) for providers and healthcare institutions. For payers, clinical research entities, and virtually any organization that benefits from patient data, Timi Access serves as an intuitive, search engine dashboard that brings out relevant, anonymized bulks of health information based on a wide range of filters and criteria. Patients are notified and even rewarded as and when they grant permissions to these entities to put in use or refer their information.

In its bid to further democratize access to healthcare data while assuring its ethical integrity, Timicoin has even come up with a visionary TimiDNA platform that essentially empowers citizens with the ability to own, control, and monetize DNA information.

Through several successful tests, pilot, and demo-runs of their robust offering, Timicoin has earned wide recognition and accolades—from government entities, healthcare institutions and even from companies in countries such as Spain and Philippines—for the novelty that they are bringing into the healthcare arena. The company is planning to further populate their platform with healthcare data to strategically initiate a full-fledged roll-out. Also, they hope to widen the scope of their platform to spur what Lowe terms as TimiMarketplace for healthcare data. 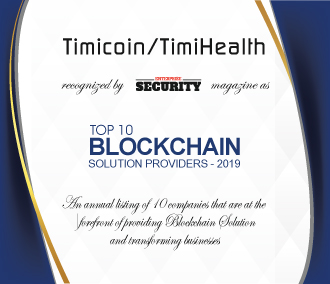