Very: The Very Truth of Blockchain

Ryan Prosser, President
Blockchain is a “buzzword” that is poised to change the way the world uses the internet, and adoption is going faster than anyone could have predicted. The recent blockchain and cryptocurrency explosion has already created over $500 billion of new wealth.

At the center of this movement is Very. The Chattanooga-based organization aims to rise above the hype to focus on one thing instead— using blockchain technology to deliver scalable, production-ready solutions. With a focus on blockchain, IoT, and machine learning, Very is helping clients solve some of the world’s toughest problems across industries. And while there is a great deal of excitement surrounding blockchain, Very is focused on the fact that at its core, blockchain is just another tool for solving business problems.

One of the many things that differentiate Very is its true understanding of blockchain and the company’s dedication to informing clients when blockchain isn’t the right solution for their problem.

“Our goal isn’t to sell blockchain,” Co-founder and SVP of Solutions Architecture at Very, Tyler Jenks states, “but to solve problems using technology. And sometimes that technology happens to be blockchain.”

In the past 18 months, an explosion of Initial Coin Offerings (ICOs) has ushered in new trends and changes in the blockchain space, creating an unprecedented demand for skilled blockchain developers that vastly outpaces the current supply.

“Many people don’t realize that blockchain development doesn’t merely require knowledge of blockchain technologies,” says Ryan Prosser, President at Very. “To build robust applications, you need experienced designers and engineers that span a variety of disciplines, including blockchain. And that can be very hard to find.”

Very addresses the challenge with its hand-selected team of US-only engineers. While other firms are forced to hire junior developers, Very takes a different approach. 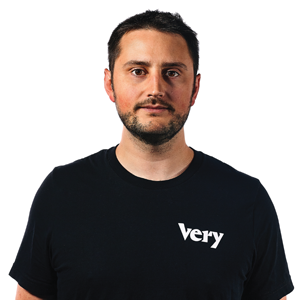 Tyler Jenks, Co-Founder & S.V.P of Solutions Architecture
Jenks states, “Very’s thesis is that if we provide the right kind of business and engineering culture, we can hire top talent that could otherwise earn outrageous salaries at places like Google or Facebook.” As part of this business and engineering culture, the firm has adopted a highly-selective hiring process and takes extra steps to ensure that teams don’t get burned out. This includes capping billing at 28 hours per week and giving team members unlimited personal and vacation time.

This unique approach to a productive company culture has more than paid off. Since launching seven years ago, Very has gained an impressive client roster that includes Shopkeep, Accenture, PBS, HP, and Loreal. Now, Very is taking the lessons learned over years of building robust, enterprise-class applications and applying them to blockchain projects like the one they built for Blockmason. The blockchain-powered iOS application called Lndr was the first-ever consumer app with ETH settlement. They are also working with Gamma, a gamer-powered distributed computing ecosystem that aims to offer an Ethereum-backed blockchain running the Plasma framework.

Our goal isn’t to sell blockchain but to solve problems using technology. And sometimes that technology happens to be blockchain

As for the future of Very, the company has plans to scale, yet its focus remains primarily on the unique company culture and the quality of its team. It is growing at a rapid rate, and has plans to expand through the end of this year, “but don’t expect this company to get too big.” While Very is excited to be innovating with blockchain, one can expect this company to stay committed to its mission of solving the biggest technology problems for clients across an array of different industries.